- January 14, 2013
I'm on a reading streak lately, if you haven't noticed. My newest finish is Deadrise by Robert Blake Whitehill. I'm not generally a reader of a thriller like this, but I'm glad I finished it.

Besides some unsavory language and sexual content, the characters in this book were well-rounded. They were believable - you could believe in a person like Ben Blackshaw and Maynard Chalk (even as disgusting as he is). Whitehill really developed each character in this book so they weren't so out there (even though some of the personalities were out there) that you couldn't believe in them. I appreciate the thought that went in to each person, major and minor.

The writing is great in this book except for a few excerpts, mostly the ones about Maynard Chalk and his business relationship with a senator. Those really were ones that I skimmed over because I didn't feel they were really important to the ongoing plot, and yet you couldn't have left them out because then Chalk's actions in the book would have made little sense. Regardless, Whitehill has a definite development of voice in his characters and writing. You could distinctly tell when the narrators switched between mostly Chalk and Blackshaw.

Usually I would not have finished such a book with unsavory characters, but they were so believable that I found myself flying through this book (not at my usual rate but faster than I would normally with a thriller book). I really appreciate the Smith Islanders (where Blackshaw lives) as described by their history and present lives. It was just interesting to read about such people, pirates I suppose you could call them in the past, living in such hard conditions today. I'm not sure if this is a real place but it very well could be for as much as you can see it as you read about it in Deadrise.

I recommend this book if you enjoy thrillers or can appreciate well-written material.

Disclaimer: I received this book in order to write an honest review. Others may or may not have the same experience(s) that I've had with the book and/or publisher.
book book review Shelton

Robert Blake Whitehill said…
I want to thank S Club 4 for including Deadrise in their review list. It is an honor to be read by such thoughtful, wholesome people, especially when my style of fiction lies outside of the kind of books usually found here on this site. This open-minded outlook will be the salvation of the very special places where spirit and intellect can commune in harmony; places like S Club 4.
January 14, 2013 at 12:30 PM

- September 14, 2008
Big A is forever telling me to not say certain things on the road. Don't call me dear. Don't gasp or shout; I'll think there's a deer. Although these are paraphrased (and he claims he's never said the first one), these are the basis for this tale. We went to the Husker game last night. Scratch that - we worked at the Husker game last night. We helped his aunt (and her church) sell backrests as a fundraiser. Big A has done this most of last year & all of this year so far. He loves it. You sell backrests until kickoff, then you watch the game, and pick up the rests after. You're there 90 minutes before game time and for about an hour or so after the game. And you sometimes get leftover food (Runzas and hotdogs and popcorn - please fine out what a Runza is for those of you who aren't from Nebraska....it's so yummy!). Anyway...we went to the game & a few of our friends helped pick up the chairs voluntarily after so (with that help plus our amazing
Read more 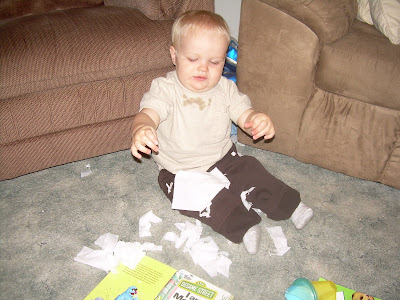 How could I stay mad at this... when he looks like this ?
Read more