Showing posts from October, 2016
Show all

The Low-Pressure Guide to Parenting Your Preschooler by Tim Sanford, M.A. (book review) 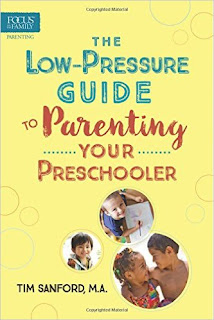 When my sons (ages 9 and 7) were toddlers, I was just overwhelmed. Kids are a lot of work! There was so much, as a young mother, I did not know. Keeping them alive and well was a lot but then there were these outside pressures. As a Christian, I must teach them about God and right and wrong, and they must be saved! As a human, they must treat each other with respect and share! Even when it's their favorite toy! As a person who hates being embarrassed, they must act appropriately and not throw tantrums in Wal-mart (and I need to teach them when they can pee outside and when they can't). These pressures were not bad things; most of them were good things to teach, but the pressure they added was immense and added to my feelings of drowning for about 4 years. image via Amazon When Princess was born (age 15 months now), I didn't want to stress about things. I did though. I stressed about breastfeeding, about her sleeping habits, about sibling rivalry (of which we were bless
Post a Comment
Read more

5 Minutes with Jesus: A Fresh Infusion of Joy by Sheila Walsh with Sherri Gragg (book review) 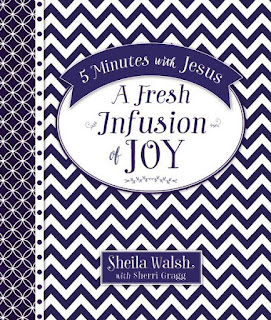 I love the idea of starting your day in Scripture and/or prayer. The Bible says His mercies are new every morning and so it just makes sense to start your day that way. However, as much as it makes sense, I fail to do that most mornings. It just doesn't work with the way I'm built and my schedule. Generally, I like to get up in the morning to work out so that is kid-free time. And then the chaos of mornings before school starts. Then it is generally mid-afternoon before I get a chance to sit down.  However, I like that this book "Five Minutes with Jesus: A Fresh Infusion of Joy" by Sheila Walsh are ones that I can really read with my kids. It's not meant to be a children's devotional but I have found that it works for us. We have been reading this at breakfast - it's quick and still spiritually deep so it's perfect for us right now at the stage we're in. image via amazon.com It is usually a page and a half devotional and then a page (5 m
Post a Comment
Read more 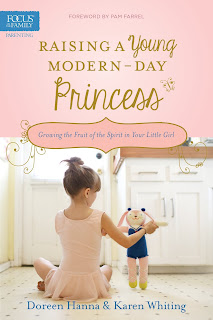 We have called our daughter "Princess" almost since the day she was born. I even love the idea of her sharing names with a real princess (although that is not how she got her name).  I have been quite disappointed in many princess books that I have read with my Princess. They make princesses seem air-headed and prissy. I believe that a princess should be graceful and kind and generous and loving and caring and tender. I love the idea behind "Raising a Young Modern-Day Princess" by Doreen Hannah and Karen Whiting which combines Scripture to teach the Fruits of the Spirit with the idea that all girls are Princesses (as they are daughters of the One True King, God). image via Amazon.com One idea from the book is a marble jar to keep track of when you see your child showing a Fruit of the Spirit (love, joy, peace, patience, kindness, goodness, faithfulness, gentleness, or self-control). My family has started to do this very thing with a sticker chart rather
Post a Comment
Read more

There are two types of people in this world… those who dread the holidays and those who live for them. Whether you’re an Ebenezer Scrooge or a Cindy Lou Who - Christmas, Hanukkah, Kwanzaa, or whatever winter holiday you may be observing (or avoiding) will inevitably be upon us. We need this balance of love and hate to perform all of those classic holiday miracles though, right?! So, let’s get started by brining our families together, dressing in our finest matching attire and snapping a cheesy, but equally awesome family photo for your 2016 Holiday Cards . Now that we have established that it’s never too early to get into the holiday spirit, it’s definitely never too early to order holiday cards to send to your loved ones for when the time is right. I have a very special place in mind that will help make all of your holiday greeting card dreams come true - effortlessly and without a single trip to the craft store. Let me introduce to you, Basic Invite . Basic Invite is a s
Post a Comment
Read more
More posts