- September 12, 2014
While my family loves Veggie Tales, I will admit that I prefer the episodes featuring Bible stories (Phil Vischer era). However, I do believe even the newer episodes offer good moral lessons which can provide good foundation for children when they are taught alongside Biblical principals and ways of life. With that in mind, I wanted to share about the new Veggie Tale production: Beauty and the Beet starring Kellie Pickler. -Randi

Available Oct. 14 on DVD and Digital Download, the Newest

GLENDALE, Calif. (Sept. 11, 2014) - Take the timeless and enchanting story of "Beauty and the Beast," toss with the unique flavors of VeggieTales and blend in the sweet voice of country music superstar Kellie Pickler - and the result is BEAUTY AND THE BEET, a brand-new VeggieTales musical that premieres Oct. 14 exclusively on DVD and digital download.
Pickler (American Idol, Dancing With the Stars) brings her unmistakable voice to the role of Mirabelle, a sweet-potato singer whose family band is on the brink of superstardom.  BEAUTY AND THE BEET blends the irresistible charm and appeal of VeggieTales with a heartfelt message about the importance of unconditional love. 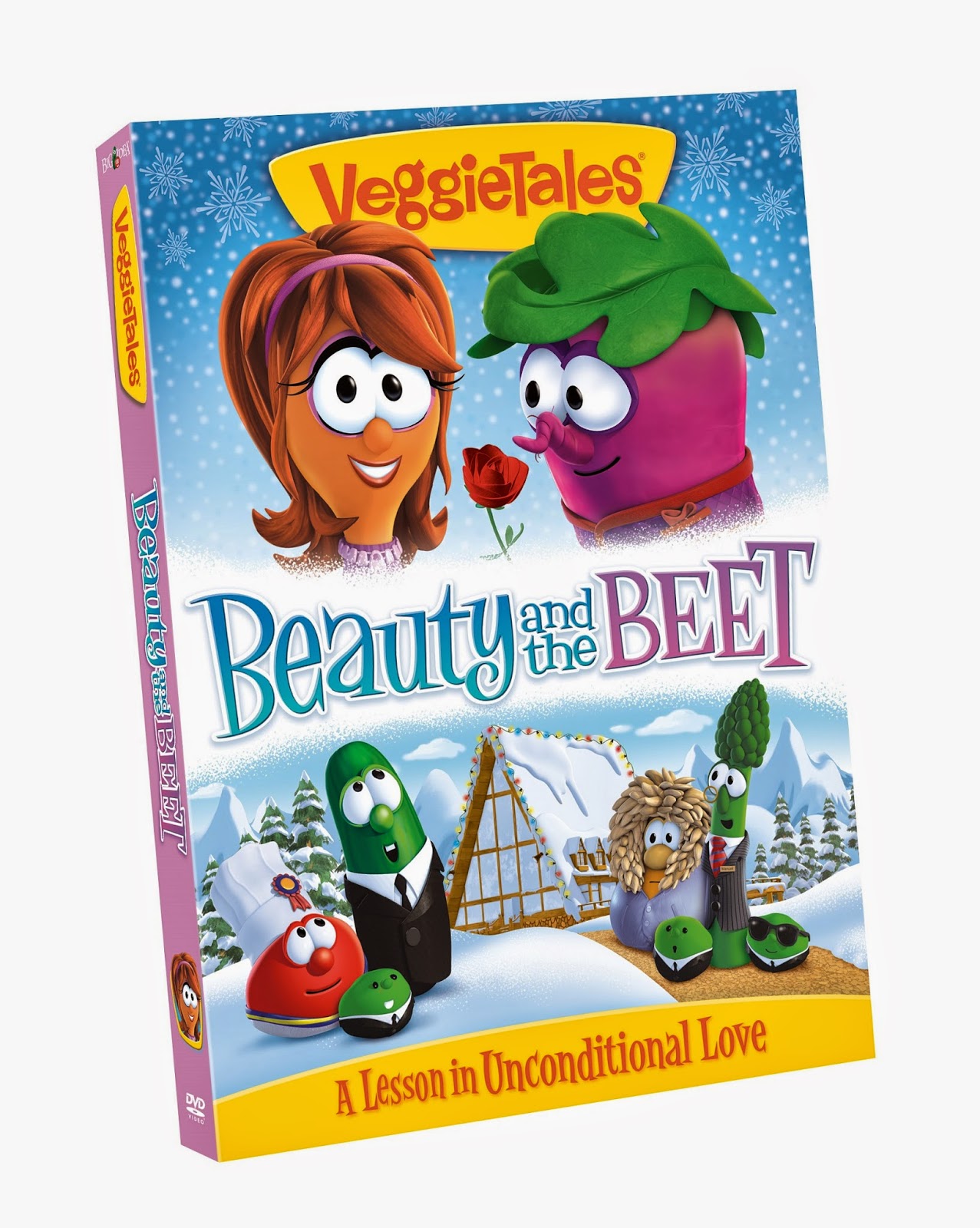 A BEAUTY AND THE BEET companion CD, featuring 10 brand-new songs - including an all-veggie rendition of the classic Christmas carol Deck the Halls - will also be available in stores and on iTunes to coincide with the release of the movie on Oct. 14.
"All my nieces and nephews grew up with VeggieTales, and when they heard I was going to be in a VeggieTales movie, I immediately became the coolest aunt in the world!" said Pickler, who joins theVeggieTales cast on eight of the 10 songs on the BEAUTY AND THE BEET soundtrack. "Mirabelle may be a vegetable, but she's beautiful through and through, especially her ability to show grace and compassion for everyone she meets. "
Mirabelle's kindness extends to Finnegan J. Beet, the bitter and lonely owner of a rundown mountaintop resort where Mirabelle's family breaks down en route to their biggest concert ever.  Matching the Beet's heartless actions with her own genuinely sweet nature, Mirabelle proves that just as God loves us all whether we deserve it or not, unconditional love is its own reward.
In addition to Mirabelle and Mr. Beet, the zesty supporting cast includes Bob the Tomato, Larry the Cucumber, Jimmy the Gourd, the French Peas and a host of other favorite veggies.
Both the DVD and the CD also include Mac and Cheese, a giddy new "Silly Songs With Larry" segment in which Larry the Cucumber reveals the surprising and heretofore untold history of his family's unexpected contributions to Italian cuisine. 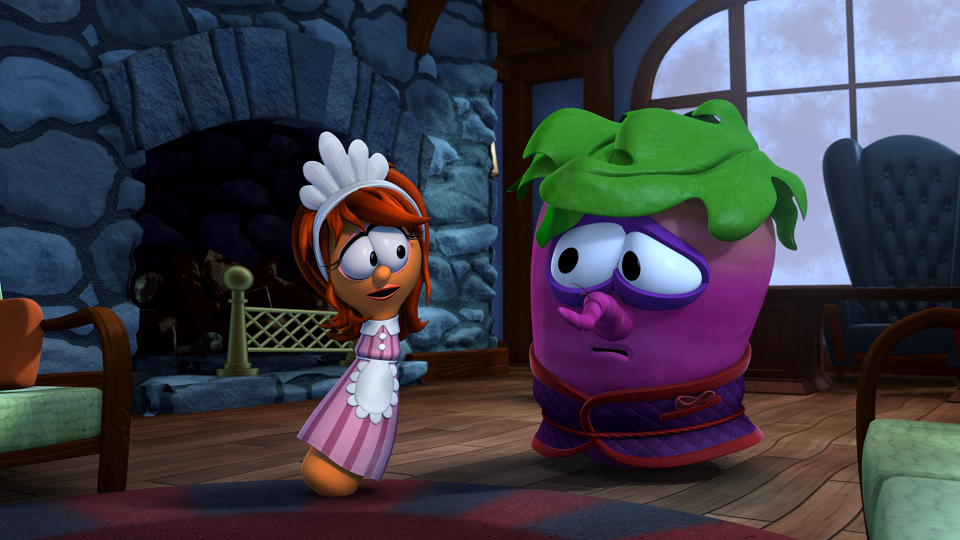 BEAUTY AND THE BEET is just the start of the fun in store this fall for VeggieTales fans, because Bob the Tomato, Larry the Cucumber and their friends will also star in a brand-new Netflix original series, VeggieTales In the House, which premieres Thanksgiving weekend exclusively on the streaming platform.
Kellie Pickler appears on the BEAUTY AND THE BEET soundtrack album courtesy of Black River Entertainment.  She grew up immersed in the country life of small town Albemarle, N.C. At age 19, she gained fame as a contestant on "American Idol," followed by a move to Nashville where she has recorded four critically acclaimed albums (Small Town Girl, Kellie Pickler, 100 Proof, and her current album The Woman I Am), performed for fans around the world, and made countless television appearances, including a 2013 win on Dancing with the Stars.

Like my friend Erin shared in her "bragging" post, I don't necessarily want to "brag" about my boys but I am overjoyed at some of their accomplishments recently! So I will share with you!


Moose is doing wonderfully at school. We moved him to the afternoon classroom and his teacher said that his behavior problems that they saw in the morning have virtually disappeared. Great! Twice last week (once at school and once at Sunday School) his teachers told me that he shared with someone. What a sigh of relief that one is; sharing is so hard but to know that what I'm implementing at home is working (even the itsy bitsiest bit!) is a relief.


Moose is also reading! I got the sight word list that kindergarteners start off with from his teacher - he read them all for me this morning. I bought a Chuggington book for him on their last book order - he read it by himself after only having it read to him (so not enough time to memorize) once. It's fun to say, "why …
Read more

This study took me FOREVER to get through! I believe I started it when Princess was under 4 months old. Perhaps 2 months old, we'll say, so this took me 4 months to get through. Please do not take this as an indication of the material. It's not, just an indication of my season of life.
"Armor of God" by Priscilla Shirer is NOT the study that goes with the movie "War Room." That's the "Fervent" study, which I also posted about. However, "Armor of God" may as well have been intended to go along with them both. There is much the same ideas in "Armor of God" as in "Fervent." I can't relate it to the movie because I have yet to see it. But, in fact, some of the exact same material is in both studies/books. This was part of the reason I feel it took me awhile to get through because I have a difficult time re-reading the same material.

However, I am thankful to have gone through this study (just an FYI, this study is…
Read more

I saw this meme and I thought it fitting:

Now, I'll be honest, my weekdays aren't looking much different than they normally do. We were already on Spring Break so I was already planning to have all four kids home with me. I usually have a plan, including quiet time stations/rotation stations during nap time.

But many things have been canceled for us as well: piano lessons (we did opt out of virtual lessons for now, but may if this is extended), 4H everything (including regional club days which my boys were super bummed about not getting to perform their skit), a lot of ministry things for me, and Wednesday night ministry things for my kids. Honestly, even having people over for supper will be an issue with our family of 6. Any 4 or less families want to come over? The hardest thing for me was that we were planning to visit my grandma this weekend, whom I haven't seen since last Easter.

For the most part, this is not going to disrupt our lives. We stay close to home …
Read more