- February 05, 2014
Have you heard of this movie coming out February 7 called "The Monuments Men"? It looks awesome and has an AMAZING cast - Matt Damon, George Clooney, John Goodman, Bill Murray, Cate Blanchett - and many others - oh also Hugh Bonneville (Downton Abbey fans, this is Lord Grantham). Star struck right there.

Usually with George Clooney films I'm a little wary - there's always a lot of cursing and explicit scenes. It's been rare that I've seen a film of his...at least without regret. This film is PG-13 and follows the true story of men who shouldn't be at the front of a war (over-the-hill, out-of-shape nerds) that went to the front lines during WWII in order to rescue the world's artistic masterpieces from the Nazis.

I know my husband would never have put his life on the line to preserve art. And that's OK but I'm so pleased these men thought it important to preserve artifacts that depicted civilization. I'm not really sure what pieces they saved (in the trailer, one says "Pablo Picaso") and I'm not really knowledgable about art and paintings, but I think they are important and beautiful and should be treasured.


I will say one thing I don't like about this movie up front is George Clooney with a mustache. C'mon man! It just doesn't work for you. That's all. Now I'll show you the trailer: 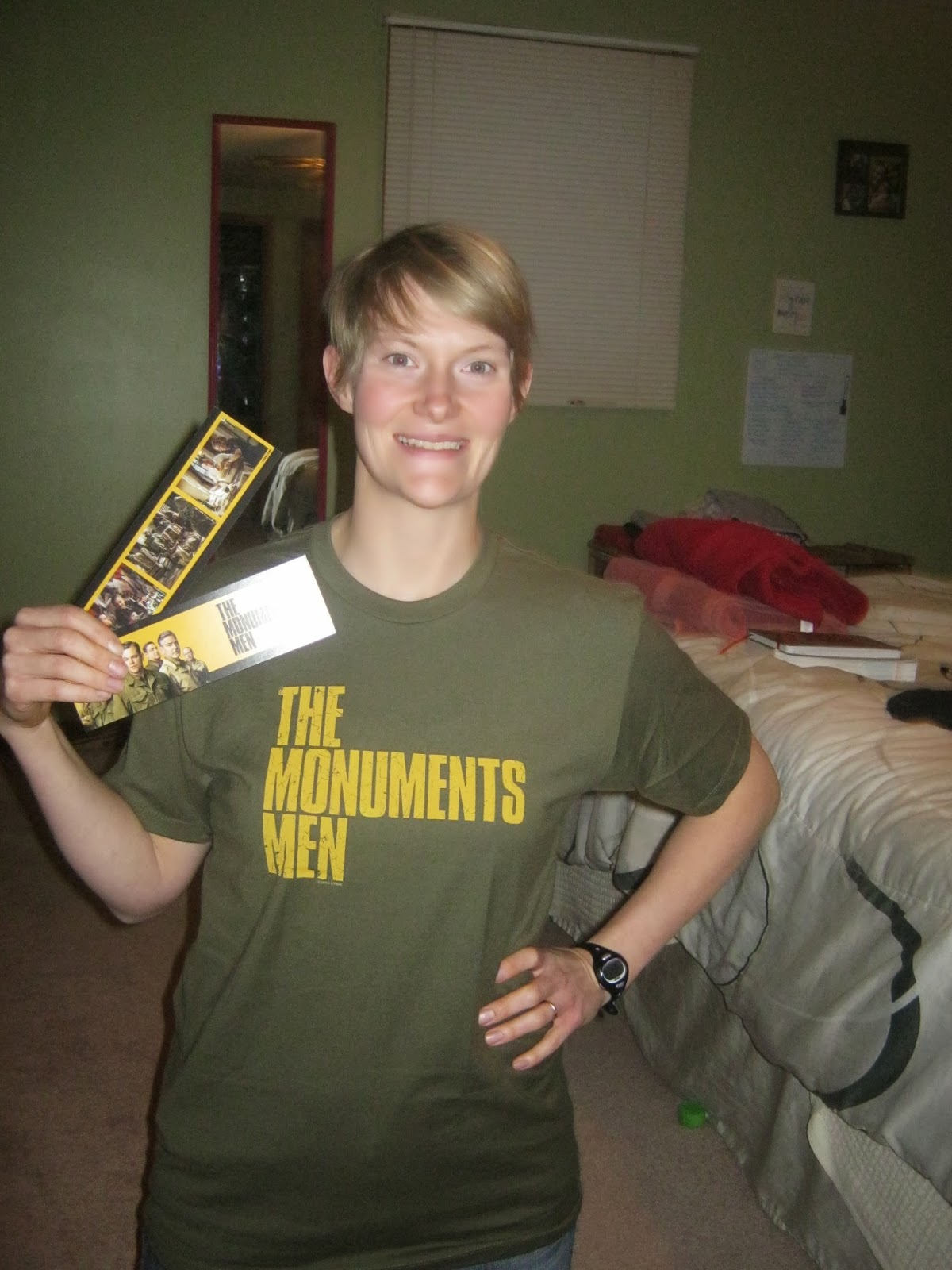 TO ENTER: One (1) entry per comment. Please leave a valid email address in comment.
Mandatory: Tell me, what piece of art would you save if you must?

Disclaimer: I received a t-shirt and bookmarks in return for my post. I am excited about this movie and find the t-shirt very comfy. Others may not agree with my opinions, but they are my own.
Entrants must be 18 or older; void where prohibited.
giveaway Grace Hill Media movie The Monuments Men

martin said…
I would save ANYTHING by Camille Pissaro mishlersharon@yahoo.com
February 7, 2014 at 2:26 PM

ShempGames said…
I would save a Warhol. Maybe the Banana used on the Velvet Underground album cover.
February 8, 2014 at 5:26 AM

Like my friend Erin shared in her "bragging" post, I don't necessarily want to "brag" about my boys but I am overjoyed at some of their accomplishments recently! So I will share with you!


Moose is doing wonderfully at school. We moved him to the afternoon classroom and his teacher said that his behavior problems that they saw in the morning have virtually disappeared. Great! Twice last week (once at school and once at Sunday School) his teachers told me that he shared with someone. What a sigh of relief that one is; sharing is so hard but to know that what I'm implementing at home is working (even the itsy bitsiest bit!) is a relief.


Moose is also reading! I got the sight word list that kindergarteners start off with from his teacher - he read them all for me this morning. I bought a Chuggington book for him on their last book order - he read it by himself after only having it read to him (so not enough time to memorize) once. It's fun to say, "why …
Read more

This study took me FOREVER to get through! I believe I started it when Princess was under 4 months old. Perhaps 2 months old, we'll say, so this took me 4 months to get through. Please do not take this as an indication of the material. It's not, just an indication of my season of life.
"Armor of God" by Priscilla Shirer is NOT the study that goes with the movie "War Room." That's the "Fervent" study, which I also posted about. However, "Armor of God" may as well have been intended to go along with them both. There is much the same ideas in "Armor of God" as in "Fervent." I can't relate it to the movie because I have yet to see it. But, in fact, some of the exact same material is in both studies/books. This was part of the reason I feel it took me awhile to get through because I have a difficult time re-reading the same material.

However, I am thankful to have gone through this study (just an FYI, this study is…
Read more

I saw this meme and I thought it fitting:

Now, I'll be honest, my weekdays aren't looking much different than they normally do. We were already on Spring Break so I was already planning to have all four kids home with me. I usually have a plan, including quiet time stations/rotation stations during nap time.

But many things have been canceled for us as well: piano lessons (we did opt out of virtual lessons for now, but may if this is extended), 4H everything (including regional club days which my boys were super bummed about not getting to perform their skit), a lot of ministry things for me, and Wednesday night ministry things for my kids. Honestly, even having people over for supper will be an issue with our family of 6. Any 4 or less families want to come over? The hardest thing for me was that we were planning to visit my grandma this weekend, whom I haven't seen since last Easter.

For the most part, this is not going to disrupt our lives. We stay close to home …
Read more